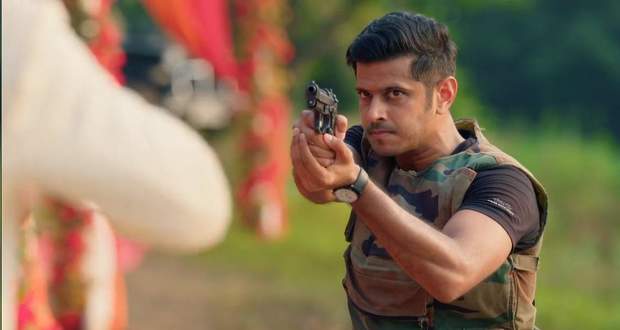 Kamal warns Vithal and Jagthap that he will get them behind the bars. Sai tells Kamal that she wants to marry Jagthap with her consent.

Kamal gets a shock on hearing Sai’s consent and his health starts getting worse. Virat and his police officers arrive there and start shooting Vithal’s goons.

Meanwhile, Chavan family welcomes the newly married couple Pakhi and Samrat in the house. They ask Pakhi to do Grehpravesh by imprinting her footmarks on the floor.

Pakhi sees Virat’s picture and loses her balance while doing Grehpravesh. Bhavani gets worried on seeing the bad luck sign and prays to god to keep everything alright.

Sai tells Virat that she wants to marry Jagthap, while Virat arrests the sharpshooter hiding behind the bushes.

He asks Sai to not to fear about anything and to come along with her father. Jagthap holds a constable on gunpoint and runs away from there.

Karishma doubts on Pakhi and tries to understand what made Pakhi lose her balance all of a sudden.

Virat assures Sai that she is safe and is out of danger, while Kamal gets unconscious and falls down.

© Copyright tellybest.com, 2018, 2019, 2020. All Rights Reserved. Unauthorized use and/or duplication of this material without written permission from tellybest.com is strictly prohibited.
Cached Saved on: Thursday 26th of November 2020 08:51:51 AM