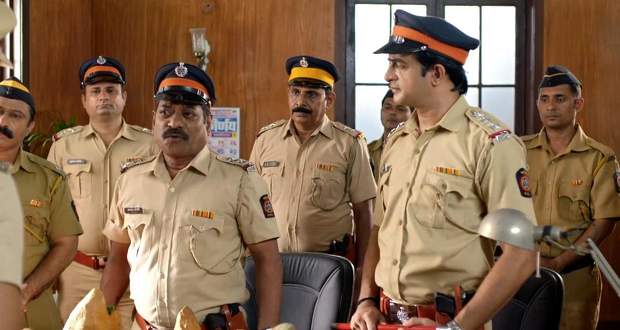 Meanwhile, Jagthap tells his father that he wants revenge while his father tells him to stay low and let him do all the work.

The scene reverts to Virat explaining that he is the main target due to Jagthap's hurt ego during which he sees a shadow in the window and opens it to reveal Sai on the other side.

They both start arguing after which Kamal apologizes for her which Virat states it is the last time he's letting it go.

At the Chavan mansion, Bhavani tells Pakhi to do Samrat's Aarti but he refuses after which Bhavani does it after which she tells her to go with him to the Airport however he again refuses to say that he'll manage and he leaves.

On the other hand, Sai is locked by Kamal while he tells civil dressed officers to keep an eye on her.

Sai calls Kamal while he reveals to her that she's in a safe house after which they argue and she disconnects the call.

Pakhi calls Virat to tell him about Samrat's revelation but he disconnects the call while Devyani snatches her phone while Ashwini comes there.

Devyani tells her about Pakhi calling Virat however she doesn't believe it and takes her out of the room. Kamal tries calling her but she doesn't pick it up.

Devyani tells the whole family while Ashwini explains that she misunderstood Pakhi talking to Samrat with Virat.

© Copyright tellybest.com, 2018, 2019, 2020. All Rights Reserved. Unauthorized use and/or duplication of this material without written permission from tellybest.com is strictly prohibited.
Cached Saved on: Tuesday 1st of December 2020 01:15:29 PM