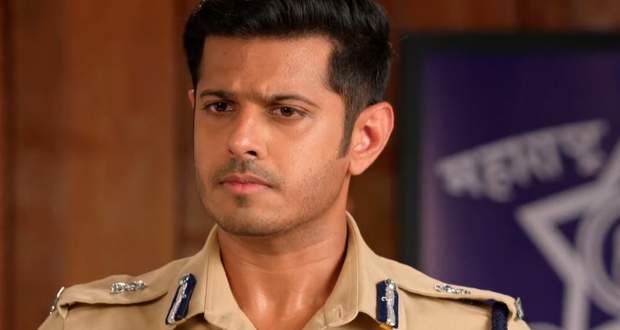 Pakhi's parents request Bhavani to send her with them as Samrat is not present after which Bhavani rebukes them while Pakhi announces that she will stay at Chavan mansion due to which Bhavani praises her.

Meanwhile, Kamal calling Sai after which they argue and she rebukes Virat for suggesting this to him while he supports Virat.

She realizes that Pooja was also involved in this plan and tells him that she is angry at all of them.

Virat and Kamal are discussing the Jagthap mission while Kamal faints and almost falls. Virat tells him to go home and rest but he refuses.

Virat removes him from the Jagthap mission however Kamal convinces him to let him be a part of the planning team.

Virat calls Pakhi while there is a gas attack at his residence. Pakhi receives the call but Virat doesn't respond to her due to which she thinks that he called by mistake.

Kamal reaches Virat's residence and finds guards passed outside the house after which he enters the house and sees Virat unconscious. He tries to wake him but fails.

The scene reverts to Pakhi being frustrated due to Virat not answering her calls while Sunny enters her room.

They have an argument over her situation with Virat and Samrat while she says that she can't forget Virat. Meanwhile, she sees Karishma's reflection in her door window.

© Copyright tellybest.com, 2018, 2019, 2020. All Rights Reserved. Unauthorized use and/or duplication of this material without written permission from tellybest.com is strictly prohibited.
Cached Saved on: Tuesday 1st of December 2020 01:23:26 PM