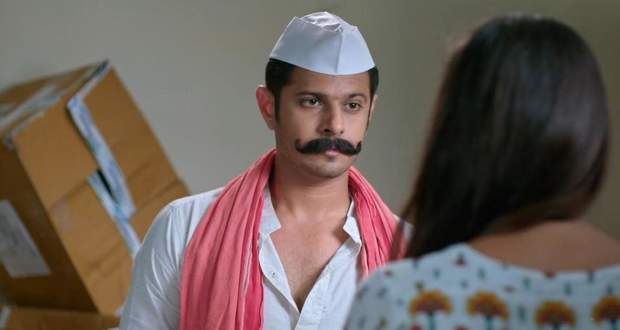 Today's Gum Hai KisiKe Pyaar Mein  5 Nov episode starts with Vaishali calling Pakhi and asking her about how everything is going on while Pakhi reveals that Samrat is M.I.A.

She further tells her that Samrat and Ashwini know about her past with Virat and breaks down saying that she feels suffocated in here.

Elsewhere, Vithal tells his wife that he will even kill someone for his son's happiness and says that the whole town will laugh at him if Sai does not marry Jagthap.

At the Chavan mansion, family members are trying to convince Mansi to eat something while Ninad comes and says that the search for Samrat is going on.

Pakhi calls Virat while Ashwini comes behind her and tells her to not burden him with the horrifying news of Samrat.

Vithal's goons are keeping an eye on Virat's residence while Virat disguises as a milkman and goes to meet Sai.

Virat reaches the safehouse where Sai laughs at his disguise and says that it suits him well.

Virat scolds her due to which she starts crying after he tries to console her by giving her the tiffin of homemade food.

Meanwhile, Pakhi calls Neha and asks her to meet while Neha argues that it is very late.

Pakhi tells Neha to reach her mother, Vaishali's house in ten minutes and disconnects the call.

Pakhi reaches the living area with a suitcase in her hand and announces that she is going to her maternal house while Bhavani stops her.