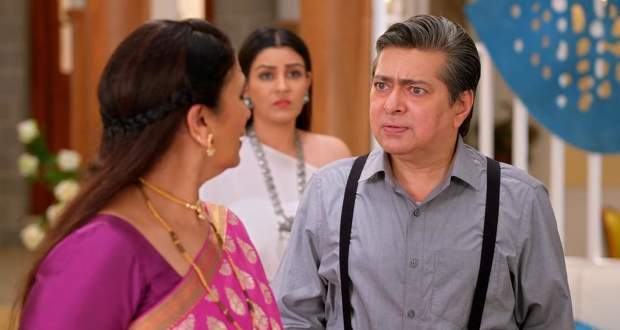 Elsewhere, Virat and Sai are talking about Pakhi while he gets emotional and remembers his memories with her.

Sai reveals that she is worried about Kamal not taking his medicines and Virat tells her that he will take care of it after which he leaves.

Meanwhile, at the Chavan mansion, Mohit and Karishma taunt Pakhi for deciding to leave while Ashwini questions her asking would she still go if Virat were present here?

Ashwini accuses Pakhi of revealing Samrat's disappearance to Virat after which Bhavani scolds her.

Ninad gets angry and threatens to throw Ashwini out of the house after which she says that she doesn't want the Chavan family's history to repeat itself.

Ninad tells her to shut up and not speak a word of it.

Sai and Kamal are conversing on a video call and she asks him if he consumed his BP medicines or not to which he replies with a lie after which Sai scolds him for lying.

Somewhere, Vithal has kidnapped a girl and makes a video of her begging Sai to save her.

Meanwhile, Karishma reveals about Pakhi-Virat to the whole family.

Sai is about sleep which she gets a video message and opens it to see the girl begging for rescue.