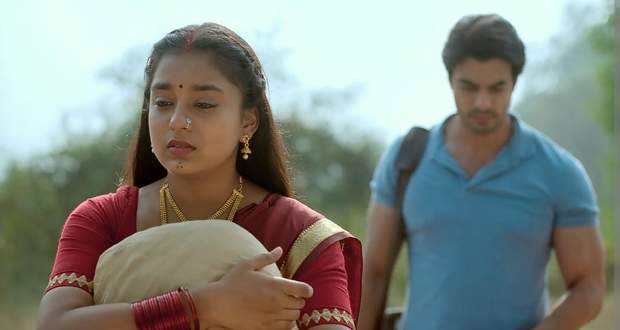 Today's Imli 11 January 2021 episode starts with Aditya giving Imlie an envelope and telling her that there is money in it and will keep sending her money.

Imlie counts money for what his family did for her and says that he should keep it.

She says that he made her feel like a maid by giving her money while he says that it is for her education.

She puts the envelope in his hands and says that how can she take his money when he is not her's.

They part ways and go in different directions.

Elsewhere, Mithi is suffering a fever while her friend and Satyakaam tend to her.

She suddenly stands up saying that Imlie is here while Imlie stands outside the door.

Mithi goes outside and hugs Imlie while Dulari angrily wonders if Imlie has come back forever.

Aparna and others ask him about Imlie and he angrily says that she went to her home.

Dulari and others ask Imlie about Aditya while she lies that he is saying in a hotel.

Satyakaam tells Imlie to come with him to bring Aditya but she changes the topic.

Mithi sends her inside and tells him that Aditya still might be angry with them while others agree.

They go to apologise to Aditya and bring him back.

Imlie comes outside and Dulari informs her that everyone went to welcome Aditya while the villagers reach the hotel.

Aditya calls his mither while Satyakaam knocks on Aditya's room when Imlie reaches the hotel.

© Copyright tellybest.com, 2020, 2021. All Rights Reserved. Unauthorized use and/or duplication of any material from tellybest.com without written permission is strictly prohibited.
Cached Saved on: Wednesday 14th of April 2021 09:17:40 AMCached Disp on: Thursday 15th of April 2021 11:04:16 PM