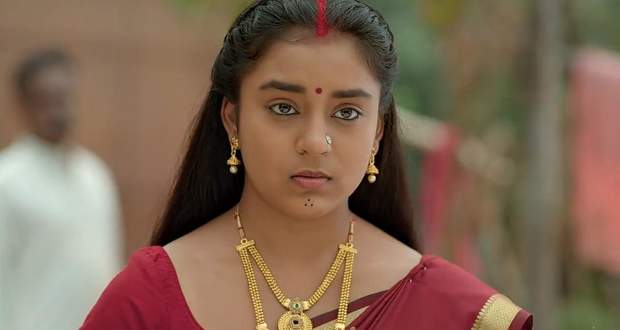 Today's Imli 12 January 2021 episode starts with Imlie reaching the hotel while Satyakaam knocks on Aditya's door and tells him that he is there to apologize to him.

He hurriedly disconnects the call when Imlie tells everyone to not disturb Aditya and go back to the village.

Aditya opens the door and Satyakaam and the villagers apologise to him for forcefully marrying him to Imlie.

They plead with him to come with them and he agrees but says that he will keep his belonging in the hotel as he will stay there only.

Elsewhere, the Tripathi's are discussing the First Rasoi ritual for Malini while Rakhi picks up the call and says Nishant which shocks everyone.

Radha gets emotional and tells into the receiver that he should call her once in a while as she gets very worried for him.

Harish takes the receiver from her and says that the call is disconnected and Radha starts crying.

Nidhi informs Malini that Nishant is her youngest brother-in-law and Radha-Harish's son who went abroad 10 years ago and never contacted them again.

Dhruv shows his displeasure on his brother's topic while Aparna tells him to stay optimistic and says that they will bring him back.

Meanwhile, Mithi makes Aditya sit and prepares things for him while Dulari comes there and tells him that he is married because of her.

Satyakaam berates her and says that if it had been anyone else, he would have sent her to jail and had made Imlie his maid.

Malini tries to cheer up Radha and convinces her to make for her First Rasoi ritual.

At the same time, Aditya tells Satyakaam and others to call him by his mams but Satyakaam replies that they call people by their relation in the village.

Later, Mithi says that a lot of post-marriage rituals have to be done and leaves.

Meanwhile, Nidhi saves Malini from getting burnt while Anu comes there and insults Tripathi's for making her daughter cook.

Imlie requests Aditya him to act in front of the villagers for the day and do the rituals.