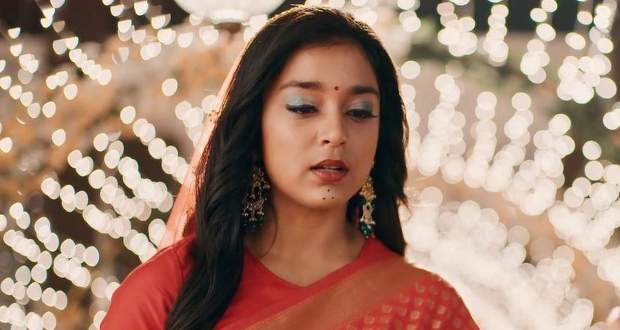 Today's Imlie 12th March 2022 episode starts with Imli struggling to remove the holy thread that Aparna tied on her wrist as a blessing.

Aryan asks Imlie to stop trying to remove the thread or else she will get herself hurt.

Hearing this, Imlie lashes out at Aryan for agreeing with Aditya for their real wedding, totally disregarding her condition that she had put forward before stepping into this fake marriage with him.

Although Aryan agreed with Aditya only for Imlie yet he paints himself as the bad guy before her and challenges her to stop the wedding if she can.

Aryan also comments to Imlie that he has the power to dictate her life which pisses off her completely.

Consequently, Imlie asks Aryan to stop the car and when he doesn’t she jumps out of it.

Meanwhile, in the Rathore house, Narmada and Arpita are trying to reach Aryan and Imlie who are not responding to any calls.

At the same time, Narmada sees the servants running outside the mansion where Neela, her sister is replacing the fake jewelry in the new branded jewelry boxes along with her niece.

Neela smoothly covers up the situation when Narmada and Arpita arrive outside the car on the spot.

Furthermore, Aryan and Imlie return to the Rathore mansion with garlands around their neck and Imlie wearing vermilion being dressed up as a bride.

Seeing the two together in the attire of the bridegroom, Narmada and Arpita get shocked.

Aryan doesn’t meet Narmada’s eyes when she questions his actions.

Narmada doubts that Aryan has forced Imlie to marry him and asks Imlie to tell the truth.

Meanwhile, Neela bursts out at Narmada as her dreams of getting her niece married to Aryan are broken.

When Neela insults Imlie for not being capable enough for Aryan in terms of looks, Aryan takes a stand for her and calls Imlie his wife.