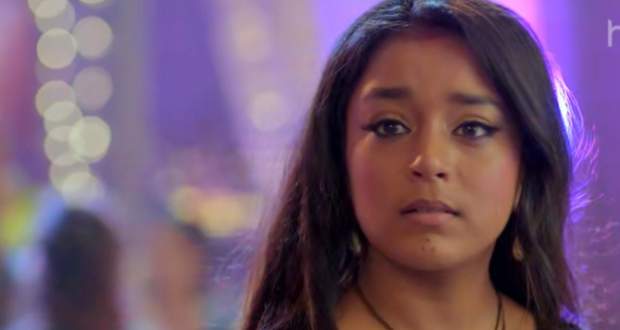 Today's Imli 13 August 2021 episode starts with Aditya defending Imlie in front of his colleagues and tactfully answering each one who was making fun of Imlie.

Aditya supports Imlie and tells everyone she is the one who is brave and looks never matter to show one's intelligence.

Further, Aditya and Imlie dance but Malini interrupts and starts dancing with Aditya.

Later, Rupi questions Malini about the saari but Aparna defends Malini and tells Rupi that it's Malini's choice whichever outfit she wants to wear.

On the other hand, Malini tells Anu that her attempt to insult Imlie failed.

Meanwhile, Aditya asks for an explanation from Malini for making Imlie wear western clothes despite her unwillingness.

Malini gets nervous and replies to Aditya in a fearful tone and tells him that she is leaving the house right now.

Upcoming Imli episode update: Imlie gets emotional and asks Malini that will she betray her trust.

© Copyright tellybest.com, 2020, 2021. All Rights Reserved. Unauthorized use and/or duplication of any material from tellybest.com without written permission is strictly prohibited.
Cached Saved on: Monday 17th of January 2022 09:08:27 AM