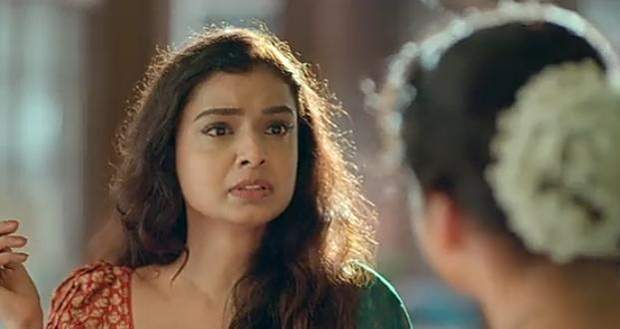 Today's Imli 13 September 2021 episode starts with Imlie sitting on her bed and crying while thinking about the recent incidents.

Mithi comes there and tells her to fight for herself while Imlie tells her that she doesn't know what to do as she knows everything is Malini and Anu's plan but she cannot let wrong happen with Malini's reputation.

Meanwhile, Anu praises Malini for her plan while Malini shows her Imlie's saree and says that she used it to lure in Aditya.

Aparna comes there and apologizes to them on behalf of Aditya while Anu hides the saree and says that he has to accept Malini.

Later, Pankaj questions Aparna and Radha who are collecting all the jewelry to give to Imlie, and asks them how can they send off Imlie.

Radha says that they have to think about their regulation while Imlie overheard their conversation and thinks to do what they are saying.

Imlie sees Malini packing her bags and questions her while Malini tells her that Aditya's reputation will be ruined if society finds out that he is keeping two wives and tells her to leave.

Anu is leaving with the saree while Dulari collides with her and decides to follow her seeing her suspicious behavior.

Elsewhere, Aditya feeling guilty and imagines everyone blaming him, and opens the door to talk to Imlie.

He gets glad seeing her in the kitchen and says that he's happy she still trusts him while she says that the trust is broken.