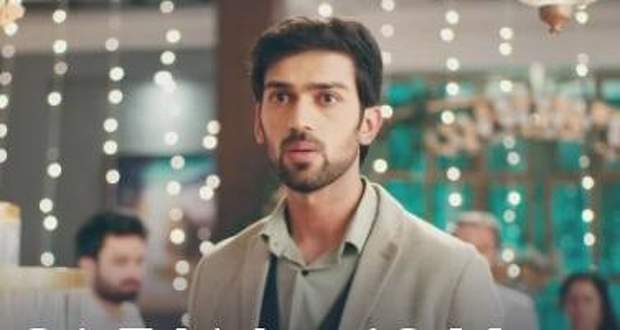 However, Aryan defends Imlie and proceeds to take blessings from Jithani Ji but she refuses to bless him.

On the other hand, Gudiya starts to shed her crocodile tears and rants about her love for Aryan.

At the same time, Imlie tries to control her giggle as she is taking pleasure in Gudiya's show while Aryan sees her chuckling.

Furthermore, Imlie greets Gudiya sweetly and asks if she wants to marry Aryan. Imlie smirks to herself as she got an idea to set Aryan with Gudiya.

Later, Imlie apologizes to Gudiya for ruining her wedding with Aryan but Jithani Ji suddenly raises her voice and yells at Imlie.

Meanwhile, Imlie talks with Narmada and asks for her blessings. Narmada blesses the couple and hugs them accepting their marriage.

At the same time, Aryan feels Imlie's hot teardrop on his hand and feels devastated.

Elsewhere, Imlie tries to rub off her sindoor when Arpita knocks and enters her room with a coffee.

Furthermore, Arpita asks Imlie about her marriage and if she was forced into it for revenge.

However, Imlie says she was not forced and is happy about the marriage. Aryan overhears their conversation.

Later, Aryan promises Arpita that he will take care of Imlie and treat her rightfully and never be the reason for her tears.

Elsewhere, Aryan feels awkward with Imlie being in the same room. He asks about her career and gets hit with random things thrown by Imlie. They get into a pretty serious argument.

On the other hand, Jithani Ji persuades Narmada to check Imlie's and Aryan's horoscopes by emotionally blackmailing her.

Afterward, Imlie wakes up getting cranky about Aryan's presence. They get into a silly fight and bicker with each other.

At the same time, Roopi informs Aparna about the horoscope and rituals while Aditya hears her.

Later, Aryan and Imlie's horoscopes are examined. The priest (hired by Jithani Ji) suggests forfeiting from this marriage.