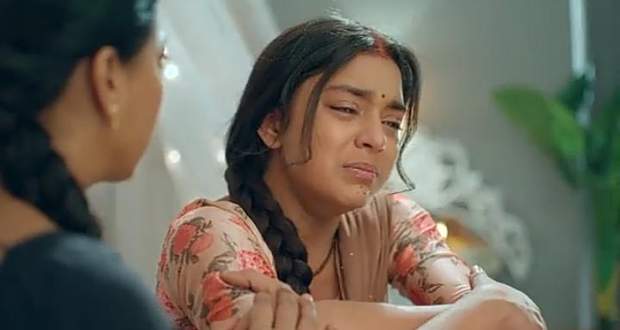 Today's Imli 14 September 2021 episode starts with Imlie telling Aditya that the trust is broken and that only the habit she has to break.

Aditya tries to convince her to believe him while she tells him that she has no option left other than to break their relationship and leave to save the family's reputation.

She removes her hand from his and leaves while Malini looks on and acts supportive in front of Aditya.

Later, Malini and Anu both burn the saree of Imlie that they had used but put out the fire seeing Dev coming their way.

Malini takes Dev to Imlie while Anu puts the saree in her car thinking to destroy it at her house.

Dev tries to talk to both Imlie and Malini as their father but Malini argues while Imlie takes her belongings and leaves the room.

Aditya tries to stop Imlie saying that he will leave the house with her too while Radha gives Imlie jewelry saying to never come back.

However, Imlie gives the jewelry back to Radha saying that she stayed silent at first due to their family and will now leave even after knowing the truth for the family.

Mithi taunts that the family doesn't value Imlie while Anu threatens Aditya to report him to the police if Malini doesn't get justice.

© Copyright tellybest.com, 2020, 2021. All Rights Reserved. Unauthorized use and/or duplication of any material from tellybest.com without written permission is strictly prohibited.
Cached Saved on: Monday 17th of January 2022 09:58:29 AM