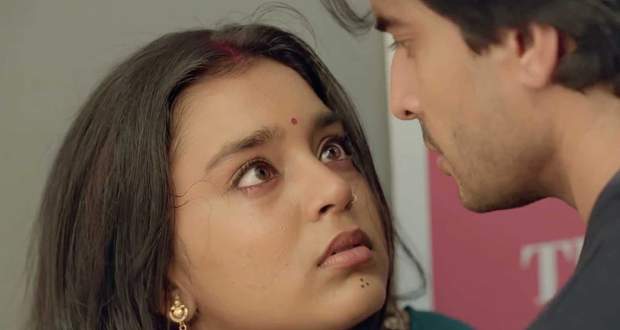 Imlie gets scared but manages to answer about her marriage by giving a fake reason.

Imlie leaves the conference as she gets nervous then Aditya comforts her with a hug and tells her to calm down.

Meanwhile, Aditya's colleague clicks pictures of Aditya and Imlie when they were close to each other and goes to Aditya's house.

Fortunately, Aditya's mentor comes there and stops his colleague from showing the pictures to Nishant.

Aditya gets into an argument with his colleague and tells him not to defame Imlie as he has a problem with him.

Later, at home, Aditya gets frustrated as Imlie doesn't listen to him for having dinner with him.

Aditya talks furiously with Malini as she didn't fill Imlie's admission form this makes Malini curious as she says the deadline is not crossed yet and she will do it soon as possible.

Further, when Aditya's Tau ji gets upset with Imlie for not filing her form on time then Aditya taunts Malini in front of all.

Malini gets upset and Aditya goes to ask for her forgiveness but both get into a heated conversation as Malini insists Aditya to tell her the truth.

© Copyright tellybest.com, 2020, 2021. All Rights Reserved. Unauthorized use and/or duplication of any material from tellybest.com without written permission is strictly prohibited.
Cached Saved on: Sunday 9th of May 2021 04:19:21 AM