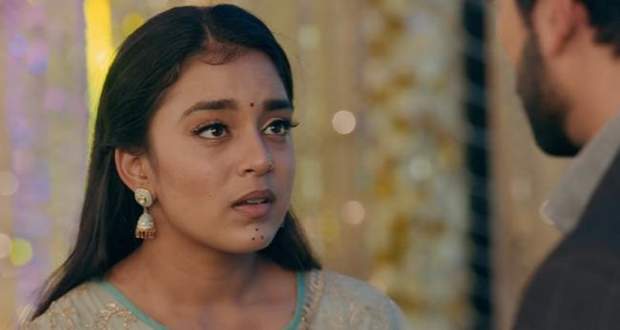 Imlie immediately understands that Anu and Malini are spying on her.

Therefore, she starts talking nonsense about black magic to fool both of them.

Meanwhile in Pagdandia, Mithi thanks Chandlal for helping her to find Aditya.

Mithi asks Chandlal if she can remove the electronic device from Aditya’s ear to make him sleep comfortably.

Chandlal tells Mithi that he will do that for her. Mithi gets wary of him as she doesn’t recognize him from Pagdandia.

Further on the next day, Aryan finds Imlie shivering in cold due to the low temperature of AC.

Aryan covers Imlie with the blanket and remembers that Imlie had given her idol of Seeta Maa to Aditya.

Aryan orders a life-sized idol of Seeta Maa for Imlie and Imlie gets very happy.

On the other hand, the terrorist Aantak contacts Aditya informing him that he is ready for the live interview.

During the live featuring of the interview, Aantak discloses that the earpiece in Aditya’s ear is a bomb in reality that can’t be removed or defused in any case.

Everybody gets shocked and frightened at the revelation of the truth.

© Copyright tellybest.com, 2020, 2021. All Rights Reserved. Unauthorized use and/or duplication of any material from tellybest.com without written permission is strictly prohibited.
Cached Saved on: Wednesday 19th of January 2022 12:29:11 PM