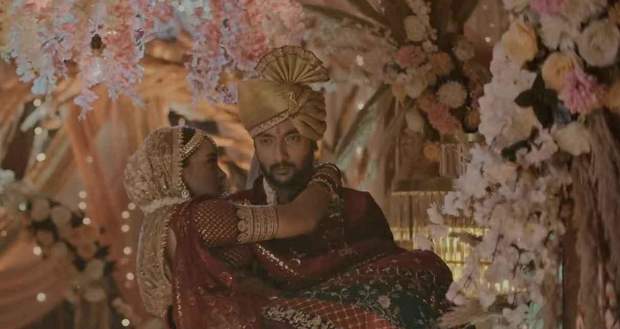 At the same time, Gudiya approaches Imlie and asks if she is doing okay. Imlie tries to go along with Gudiya and fakes her sadness.

On the other hand, Neela persuades Narmada about Gudiya's marriage to Aryan.

Furthermore, Aryan reveals a shocker to Neela by going against her and taking a second opinion on the horoscopes.

Elsewhere, Aparna gets a phone call about the successful horoscope. She informs her family members and consoles them to feel happy for Imlie.

Meanwhile, Aditya listens to everything and feels shattered. He walks away feeling vulnerable and regretting all his past deeds.

However, Aparna visits Rathod’s mansion and says she wants to do all the bride rituals for the marriage as Imlie's mother. Imlie feels overwhelmed by happiness and feels lucky to receive motherly love from her.

Later, Aryan tells Imlie about the fake horoscope and forces her to get ready for the engagement.

Elsewhere, Aparna talks with Aditya and asks him to accept the truth but he agrees to disagree. He says that Imlie will always be his wife.

On the other hand, Aryan demands Imlie to get ready for the engagement while she starts cooking plots to escape it.

At the same time, Imlie sees Narmada excitedly talking with Arpita about the engagement.

Henceforth, Imlie feels bad and dolls up herself.

However, Aryan sees Imlie and loses his mind and pupils dilate by witnessing her bewildering beauty.

Later, Aparna welcomes everyone and greets them. They see Imlie and feel overwhelmed by witnessing her groomed beautifully.

Furthermore, Aparna asks Aryan to shower Imlie with happiness and to never hurt her. Imlie fakes her tardiness to stop Aryan from promising.

However, Tripathi's cheer and sweet talks with Imlie, trying to lift her mood. Aparna asks Imlie to never rescue Aditya anymore and to find her happiness.