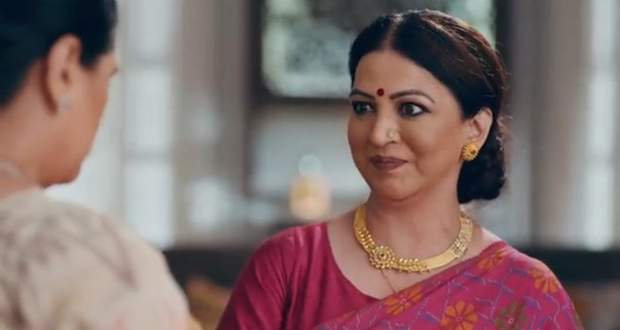 Today's Imlie 16th March 2022 episode starts with Aparna greeting everyone and taking care of all the preparations while Neela and Gudiya start to plot against Imlie to stop the engagement.

Elsewhere, Narmada asks Imlie about her dull face and tardiness. Imlie says it’s because she wants to talk to Meethi. Aryan brings oats for Imlie and provokes her to eat them.

However, Aryan calls Narmada, Arpita and Aparna to complain about Imlie when she opposed eating the oats. Everyone persuades her to eat it.

Meanwhile, everyone grabs Imlie's hands and legs while Aryan feeds her.

Later, Aryan grabs Imlie's arm and stares at her cute red angry face adoring her, he wipes off the food stuck on her chin. She nudges him away from her and accuses him of stealing a good friend from her.

On the other hand, Gudiya flirts with Aryan pushing herself all over him.

Elsewhere, Aditya fills the walls of his room with Imlie's photos stating that the engagement will not happen.

Meanwhile, the priest asks for the bride and groom. But only Aryan arrives and Imlie is nowhere to be found. Meethi arrives at the venue to meet Imlie as Aryan planned to surprise her.

Amidst the hustle and bustle, Imlie feels overjoyed listening to Meethi's voice but Neela and Gudiya conspire against her and abduct her.

Searching for Imlie, Meethi accidentally enters Aditya's room and discards all the photos hung by him asking to let go of Imlie and not to call her mom anymore.

It is revealed that Neela and Meethi are old acquaintances, Meethi was working as Neela's maid.

At the same time, Aryan introduces Meethi as his mother in law and asks Neela to respect her.

Later, Gudiya accuses Imlie that she eloped with her ex. Neela also talks bad about Imlie making Aryan furious about it. He barges into Aditya's room and demands Imlie's whereabouts. Everyone tries to stop their fight.

Nevertheless, Aryan asks Aditya to face the fact that Imlie is now married.