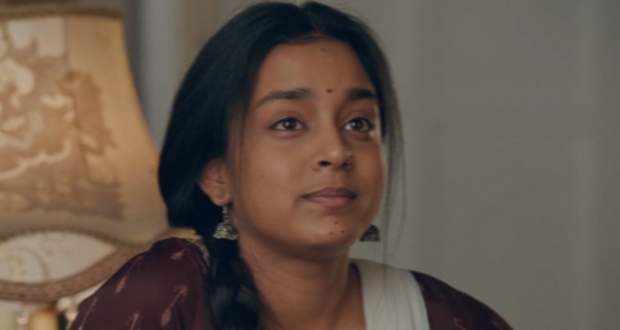 Today's Imli 17 January 2022 episode starts with Aditya denying to believe Aantak that he has planted a bomb in him.

At the same time, Aantak presses a button on a remote after which Aditya gets a shock in the brain.

The Tripathi family, Imli and Aryan, and the public watches Aditya dithering in immense pain on the live featuring of the interview on the news channel of Bhaskar Times.

The terrorist threatens Aditya not to remove the earpiece otherwise the bomb will blast.

At the same time, Imlie bursts inside Aryan’s cabin and starts accusing him of deliberately sending Aditya to Pagdandia for the interview because of which Aditya’s life is in danger.

Aryan questions Imlie if she actually thinks that he is such a bad guy. Imlie affirms his statement.

Aryan receives a call and starts leaving the office.

Imlie tries to stop him but Aryan doesn’t pay heed to her calls. Instead Aryan locks Imlie inside his office.

On the other hand, Tripathis’ tries to arrange for the ransom money to save Aditya’s life.

Pankaj asks his elder brother for the property papers to arrange for the money but he gets anxious.

On the other hand, Malini calls Anu for help. Anu insults Tripathi’s by offering them the blank check.

Meanwhile, Malini starts badmouthing Imlie and accuses her of conspiring against Malini and Aditya.

On the other hand, Imlie manages to escape Aryan’s office but gets into trouble with the police.

© Copyright tellybest.com, 2020, 2021. All Rights Reserved. Unauthorized use and/or duplication of any material from tellybest.com without written permission is strictly prohibited.
Cached Saved on: Wednesday 19th of January 2022 01:23:46 PM