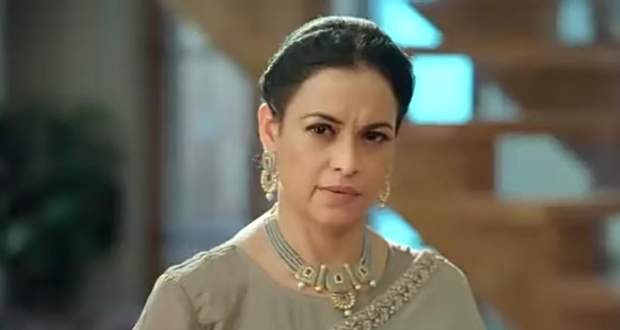 She argues with him saying that he doesn't know her problem while he tells her that he knows very well how it feels to be friend-zoned.

She requests him to withdraw the case while he refuses to do so and she leaves challenging him that she will be the one to win the case.

The next day, Harish informs the family members that they are summoned by the court to come to the court as a witness while Aditya tells Imlie that he still doesn't believe that Malini took advantage of him.

Elsewhere, Malini tells Dev to convince Imlie to withdraw the case as she is fearful but she still refuses to accept her crime as he lectures her.

Anu tells them that they don't need to bed to Imlie as she has arranged in such a way that the Tripathi's won't be able to reach the court.

Later, the Tripathi family is about to leave for court when they get shocked seeing a mob of people outside their house who delay them from reaching the court.

Meanwhile, Kunal requests the judge to give him some time as the Tripathi family will be reaching any time.

Imlie stops a lady from throwing footwear at Aditya and rebukes them for blaming Aditya without knowing the truth.

Later, the judge is about to close the case when Imlie and the Tripathi family reaches there making Malini worried.

Anu tells Malini to not worry as Mr. Desai will win the case.