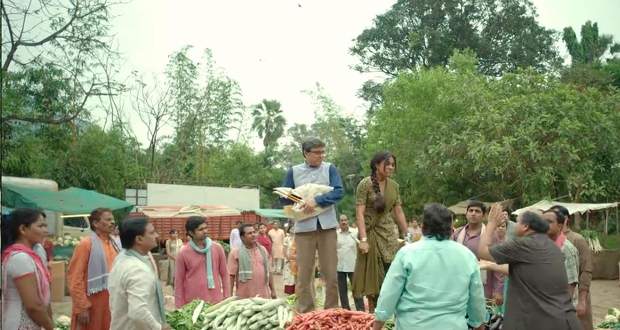 Today's Imli 18 December 2020 episode starts with Imli waiting for everyone to come in the hall. Imli witnesses Twinkle drinking the tea full of sugar and rush to stop her.

She throws the cup of tea and scolds Twinkle for drinking tea. Everyone gathers in the hall and Rupali asks Twinkle to stand like a hen.

The new house helper reveals that Imli added a lot of sugar in the tea, while Imli is also punished and asked to stand like a hen.

Aditya goes to the kitchen and drinks the tea with the excess sugar. Further, Aparna scolds Aditya for always being in a rude mood.

Imli and Bade Kaaka go to the market to buy groceries. Imli creates a scene there and everyone kicks her out of the market.

Later, they both go to a shop to buy honey, while the shopkeeper tries to sell fake honey to them.

Imli scolds him and throws the entire honey. All the shopkeepers gather together and ask Imli to pay their losses.

Aditya stops his bike there and gets shocked to see Imli creating a scene in the market. Imli starts recording a video of the shopkeepers and warns to send the video to the news reporter.

Upcoming Imli episode update: Imli to get on the top of the tree to get pure honey for Aditya and his family.

© Copyright tellybest.com, 2020, 2021. All Rights Reserved. Unauthorized use and/or duplication of any material from tellybest.com without written permission is strictly prohibited.
Cached Saved on: Sunday 1st of August 2021 07:20:49 AM