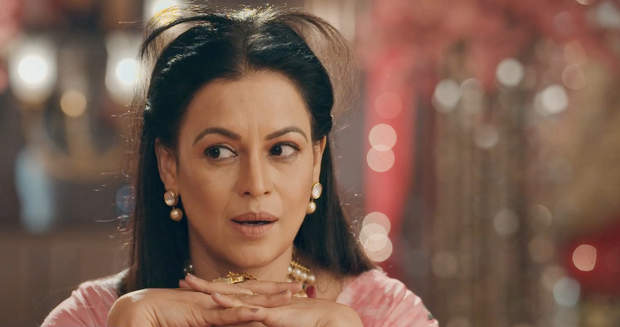 Today's Imli 18 December 2021 episode starts with Anu calling Imlie a servant with anger and Imlie not responding to Anu.

Imlie responds only when Anu calls her with her name.

Later, Anu asks Imlie to take her interview and Imlie makes arrangements for the interview.

Anu’s hair appears funnily and Imlie asks her to give different stills and also to pose like 12 years back young girl.

Imlie controls her laugh and asks her to talk about dressing sense.

Meanwhile, Aryan comes to Anu and informs her that Malini is calling.

Aryan warns Imlie and asks her to do work.

Imlie shows the funny video of Anu captured by her in the interview and Aryan smiles at it.

Imlie is very happy to see the smile on Aryan’s face.

On the other hand, Aparna and Radha go to Narmadha’s house and Aparna feels disappointed for Aditya marrying Malini.

At the same moment in Tripathi’s house, Aditya thinks about Imlie and feels sad.

Aparna, Pankaj, and all the family members make it clear to Malini that they are not attending the marriage.

Later, Imlie convinces Aparna and all Tripathi family for attending the marriage.

Imlie bursts out of pain in front of Aparna and she apologizes to Aparna for leaving Aditya.

Meanwhile, Aditya and Malini enter the wedding hall and Imlie feels disappointed with a heavy heart.

Aryan motivates her to do her work.

Pandit offers Aarti thal to Aditya and Malini but as it is about to fall, Imlie and Aryan hold it.

Aditya taunts Aryan saying that they handled Bhaskar Times very well so they can do Aarti also.

Imlie utters that faith can’t be judged by such thoughts and she gets ready to do Aarti.