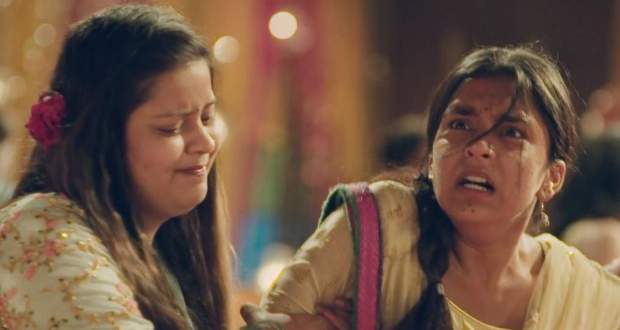 The customer has black spectacles on, a headscarf wrapped around his head, and lots of gold rings adorning his fingers.

Madam, the brothel keeper, tells Imlie to oblige the customer’s request as he has taken fondness of her.

Imlie is scared as the customer is shown a room to spend time with her.

As soon as the door is locked, Imlie starts throwing things at the customer to hide her modesty.

However, once Imlie gazes at the customer’s eyes, she realizes it is Aryan.

Imlie hugs Aryan so tightly that the latter takes some time before embracing her completely.

Aryan asks Imlie if she is stupid and who gave her this address to reach for the said assignment.

Imlie has no clue.

However, Aryan realizes that Malini planned to trap Imlie in an unfortunate situation.

Aryan tells Imlie that they will escape Mirchi Bar, the brothel, through the window.

However, Imlie is keen to free other girls working in Mirchi Bar as prostitutes too.

Both Aryan and Imlie construct a plan. On the other hand, Aditya is anxious for Imlie’s reply.

He calls Malini, asking where she is. Malini lies that she is meeting Anu outside.

Aryan pretends not to like the room provided by the brothel keeper.

But Imlie acts and grabs his legs, telling him to stay. The brother keeper then shows Aryan all the rooms.

Aryan does this so other girls can come out of it and prepare to leave as per Imlie’s instructions.

All the girls trapped inside leave and Aryan fights off the remaining people, sparing the brothel madam as he does not raise his finger at any woman.