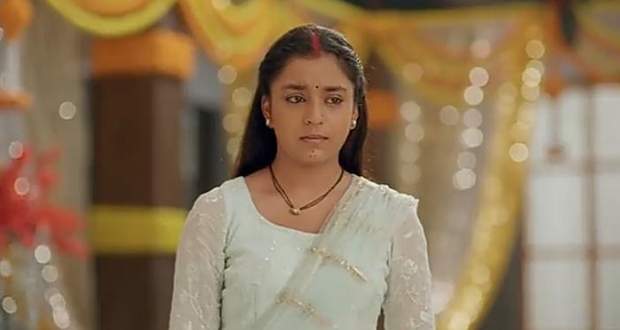 Meanwhile, Harish praises Imlie in front of the guests which makes Imlie happy. Imlie feels glad to know that Harish has started to trust her again.

Further, everyone gets delighted to hear Rupali singing Bhajan, as she sings melodiously.

On the other hand, Malini prepares herself to do Durga Maa Aarti with Aditya.

But, Dulari stops her and makes her busy talking to her. In meantime, Aditya and Imlie complete their Aarti.

Later, a burning smoke comes in the hall and everyone gets worried, as Rupali gets caught inside.

Pranav comes and rescues Rupali. Everyone gets shocked to see Pranav.

He tries to apologise to the family. Unfortunately, no one believes in him.

Imlie humiliates Pranav saying that he isn't trustworthy. Malini tells Aditya that Pranav should get a chance to prove his innocence.

Fortunately, Aditya speaks from Imlie's side saying that whatever Imlie has done till now was always correct.

Henceforth, Imlie's decisions will always be right for every family member.

Rupali gets emotional and starts crying.

Upcoming Imli episode update: Pranav is on a mission to get the Pendrive. Imlie gets suspicious about Pranav's intentions.