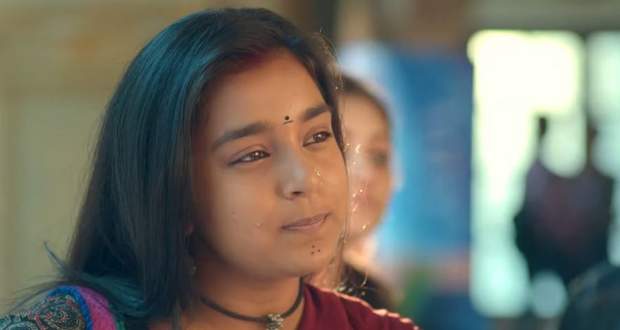 Today's Imli 19 April 2021 episode starts with Malini showing the college to Imlie while a teacher tells Malini that she has to discuss something with her.

Malini goes while other students start teasing Imlie and rag her.

A guy starts choking and everyone panics while Imlie punches him from behind and saves him.

She dances in the corridor and accidentally hits the principal and apologises to her while the principal welcomes her into the college.

Malini is taking her to her class while four students distract Malini and pour water over Imlie's head.

Someone notices Imlie's Sindoor and questions her while Malini gets angry at Imlie.

Meanwhile, Radha and Aparna pester Nishant about Pallavi while he distracts them and sends them away.

Elsewhere, Prakash wakes up and tries to convince Mithi who slaps him and questions him about Imlie's way of living.

Mithi tries to light herself on fire while Prakash and Bindiya manage to stop her.

The Tripathi's talk about whether Imlie should be given a phone while Malini comes there scolding her.

Malini explains the situation to the family and checks Imlie's bag to find the Sindoor bottle.

She destroys the Sindoor and warns Imlie that she should never wear Sindoor again.

Upcoming Imli (tomorrow) episode update : Malini to give her Sindoor to Imlie.

© Copyright tellybest.com, 2020, 2021. All Rights Reserved. Unauthorized use and/or duplication of any material from tellybest.com without written permission is strictly prohibited.
Cached Saved on: Thursday 29th of April 2021 03:50:57 AMCached Disp on: Thursday 6th of May 2021 07:00:55 AM