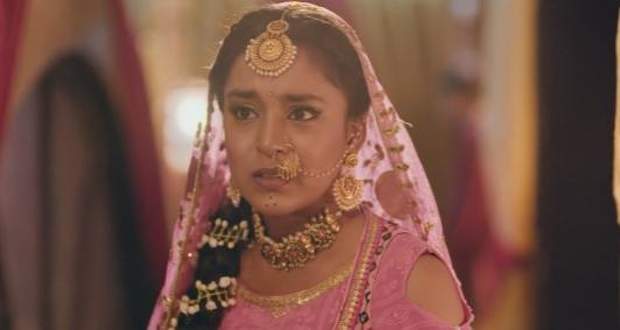 Today's Imlie 19th February 2022 episode starts with Imli and the other girls running out of the brothel, however, stopped by the brothel madam and his men.

When the girls step back afraid, Imlie motivates them with her encouraging words, making them realize if they want to escape her cage they will have to fight her off.

Meanwhile, Aryan picks up a chair and sits at the side, finding the entire scene thrilling and entertaining.

At the same time, one of the goons makes an attempt to attack the girls, being ordered by the madam.

Imlie kicks the goon in the throat so hard that blood starts oozing out of his mouth.

The goons attack one after one, Imlie fights all of them with other girls supporting Imlie in the fight.

On the other hand, Aryan watches the girls fight, bravely.

Seeing a goon coming to attack Aryan from behind, Imlie pulls Aryan towards her with the rolled scarf and back kicks the goon in his gut.

Further on, the police arrive at the place and take all the goons under arrest along with the brothel madam.

The girls show their gratitude towards Imlie because of whom they will be able to live their life freely.

When Imlie and Aryan start fighting cutely again over Imlie calling Aryan an old man, Gilhari compliments both that they are a sweet couple.

Later on, when the girls leave, Imlie takes Aryan back to the building where the madam used to run the brothel.

There Imlie thank Aryan for saving her dignity and life, sharing her hope and faith with him.

Imlie asks Aryan about how he came to know where she is, then Aryan reveals the truth of Malini doing all of this.

At the same time, Malini arrives at the brothel and tells both of them that she was only testing Aryan's honesty.