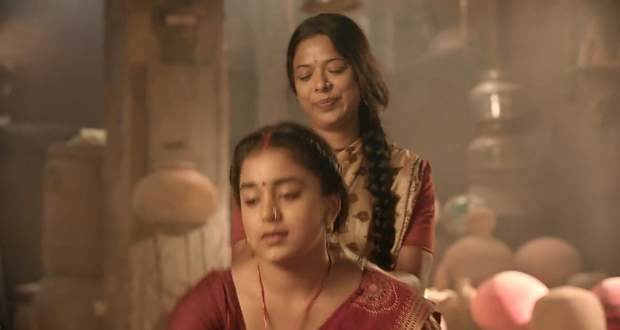 He sees a person's dead body and fire around it.

He takes out his camera to click pictures when suddenly the rebel and police come there fighting each other.

Aditya clicks their picture and doesn't notice an explosive coming towards him.

Suddenly, Imlie saves him and they both fall to the ground.

Aditya and Imlie and run and take shelter while he berates her for coming there to save him.

She tells him that she didn't come for him but his family while an explosive comes towards them and Aditya takes her and runs.

They take shelter behind a tree while Imlie convinces him to come back to her house and leave in the morning.

They reach home and Aditya feels bad for talking harshly to Imlie while she feels bad because of his scoldings.

She cries in the corner but wipes her tears seeing her mother.

Mithi asks her what she is doing here while she requests her to massage her hair with oil.

Mithi asks her about her in-laws while Imlie happily recalls the family members.

She further questions her what happened to the girl Aditya was going to marry while Imlie acts of sleeping to prevent from answering.

Next morning, Imlie gives tea to Aditya but he declines to say that he had to leave.

She tells him that there is still danger outside and informs him that Satyakaam's people will be with him for his safety.

Mithi and Imlie go outside to bid him goodbye while Dulari comes there with Imlie's class teacher.

The teacher requests him to visit his school for guiding their children and he agrees.

At the school, Aditya is asked questions regarding news reporting and truth while Aditya gives a response to everyone.

He says that lying is the biggest punishment for an honest person while looking at Imlie.

She goes with the girls to work on a project while the teacher gives Imlie's documents to Aditya who gets tensed seeing his name joined with Imlie's.