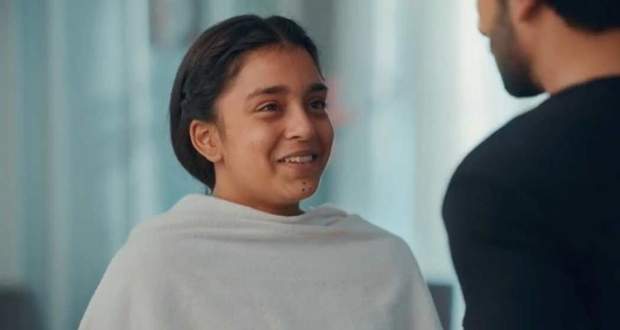 Today's Imlie 1st March 2022 episode starts with Aryan driving his car harshly even though the weather is pretty bad to rescue Arpita.

At the same time, Imlie is frightened and tries to convince Aryan to drive cautiously but he does not listen to Imlie and drives fast.

Meanwhile, a red cloth lands on the windshield and blinds Aryan's view. A bunch of wooden logs pierces the glass shield of the car in which Aryan and Imlie are traveling.

On the other hand, Arpita struggles for her life and eventually faints after some time. Aryan hurts his head through which blood started oozing out.

Furthermore, Narmada learns about the storm and calls Aryan. Imlie lies to her saying Arpita had already reached her friend’s house.

On the other hand, Aditya visits Narmada to comprehend Imlie and Aryan's whereabouts.

However, Aryan gets into a fight with the police officer and crosses the barrier to rescue Arpita.

Meanwhile, Aditya sees Arvind's portrait and confirms that he is Aryan’s relative. Narmada narrates about Arvind’s and Arpita's relationship. Aditya leaves the house announcing that something important has come up.

Elsewhere, Sundar is worried about Arpita and tries calling her but her phone is off.

Furthermore, Imlie and Aryan are terrified at the view in front of them. Arpita's car is fully crushed with the branches.

When Aryan has a breakdown, Imlie motivates him to continue on their mission to save Arpita.

At the same time, Arpita is dragged out of the car safely but Aryan falls and his head hits a rock and a wooden log falls on him.

Furthermore, Sundar arrives at the scene and helps Imlie to move the log away to save Aryan.

Meanwhile, Aparna sees that Aditya has wrongly reported about the weather telecast and worries about him.