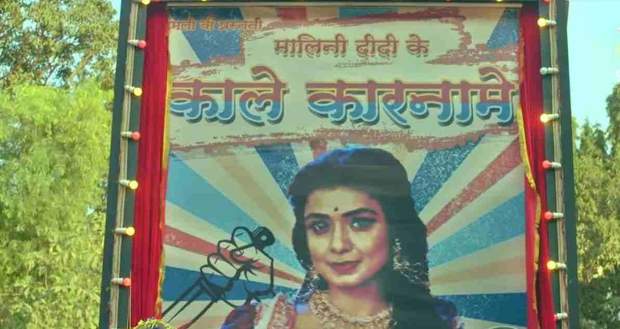 Today's Imlie 20th February 2022 episode starts with Imli swearing over the goddess Sita that she will definitely expose Malini in front of everyone.

Stepping forward, Malini retorts that Imlie can only talk of big things but not really do anything.

Imlie challenges Malini to tell what she has done while Malini retorts, getting riled up, that Imlie can’t do anything against her.

Reaching near the railing of the balcony, Imlie deliberately gives a push to Malini on her shoulder, provoking her with her words.

Malini shouts at Imlie, pushing her with all force that Imlie falls down the railing.

When Aryan blames Malini for Imlie’s murder, Malini calls Anu and reaches her house in a frazzled state.

On the other hand, Aryan realizes Imlie was faking her death as it was only part of her plan.

Aggravated, Aryan shouts at Imlie being terrified in his core with the thought of losing her.

At the same time, Anu calls Aryan and threatens him to get convicted for Imlie’s murder if he said a single word against Malini to anybody.

Further on, Aditya gets into an argument with Aparna before going to meet Malini at Anu’s house.

Imlie creates an illusion of her ghost being roaming around which gets Anu scared while Malini tries to soothe her.

Aditya also arrives there and apologizes to Malini for not taking care of her but Malini makes him leave saying Anu needs her at the moment.

On the other hand, Aryan leaves Imlie alone in her plan finding it very stupid, however, stays outside the Chaturvedi house as he cares for Imlie but doesn’t accept it.

Therefore, to confirm her suspicions, Malini goes to the same place again where the brothel is located.

To prevent her plan from getting flopped, Imlie takes Aryan’s help to the same place in time and henceforth Malini finds Imlie’s dead body lying as it was before she had left.

Imlie and Aryan sigh in relief which was short-lived as they get shocked when see Malini driving a road roller in the direction of Imlie.

Imlie gets really scared, praying to God to save her from Malini while Aryan records Malini driving the road roller to run it over Imlie in order to kill her.