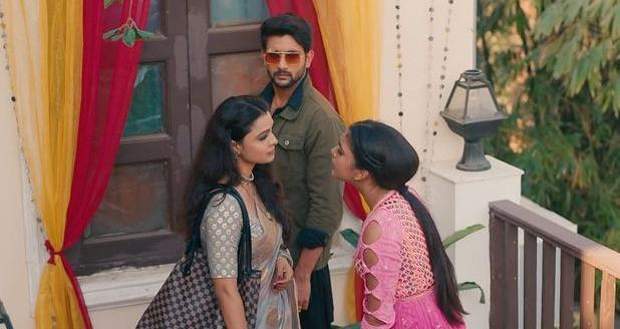 Today's Imlie 21st February 2022 episode starts with Malini being confused about whether Imlie is dead or not.

Aryan watches Malini's bewilderment behind the scenes as Imlie stays dead silent on the ground.

When Malini's confusion doesn't fade away, she decides to handle to road roller herself to crush Imlie's body with.

This way she will get to know whether Imlie is dead or not. Even if she's not dead, she will be once the road roller crushes her body.

Aryan instructs Imlie on the secret mic to get up. Aryan records the whole ordeal on his phone.

However, when Imlie does not get up, Aryan runs towards Imlie and grabs her. Malini is left shocked when Imlie reacts to Aryan's grab.

Consequently, Malini confronts Aryan whether Imlie is his boss or vice-versa.

All of Malini's hatred towards Imlie pours out in her rant.

When Malini stops, Aryan shows her the video of her handling the road roller towards Imlie.

In addition, Imlie tells Malini that she will expose all her evil ways soon.

Scared, Malini pushes Aryan and Imlie to the ground and crushes the mobile phone, also destroying the video recorded with it.

Malini grins and asks both Aryan and Imlie where the proof is now.

Malini also calls the cops and pretends she's under threat from Imlie and Aryan.

When the cops arrive, Malini acts as if Imlie and Aryan were trying to harm her.

However, the cops reply that it is Imlie who has a wound on her forehead, not Malini.

Malini then proceeds to remove the red paint from Imlie's forehead and tells it's all fake.

However, in the end, the cops warn Malini to not waste their time in her domestic matters.

Later, Imlie gets frustrated and tells Aryan to leave her alone. Imlie cries her heart out, talking to her favorite God.

Aryan is moved by Imlie's sincerity and pain and tells her to stop wailing.

He hands her his phone so she can call her family. Imlie nods and surrenders, taking Aryan's phone.

On the other hand, Aditya suspects that something is brewing between Imlie and Malini as both of them are absent.

With this doubt in his mind, Aditya visits Anu's house to fetch Malini.