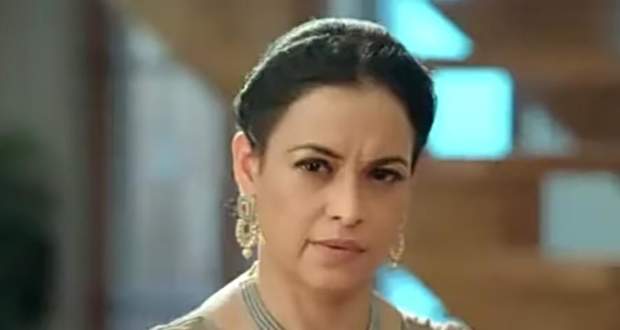 Today's Imli 21 September 2021 episode starts with Aditya telling Imlie to apologize to Malini and Anu or else he won't talk to her.

Imlie goes after Malini and apologizes to her while Malini rebukes her when Anu accidentally reveals that Malini had worn Imlie's are that day.

Imlie hearing that calls Aditya and tries to stop Malini.

However, Malini leaves while Aditya scolds Imlie for misbehaving with Malini.

The next day, Aditya drops Imlie to college while she overhears some students bad-mouthing her and saying that she wrongly alleged their Malini for money.

Elsewhere, Anu wakes up with a hangover while Malini tells her what happened and says that she is going to hurt Imlie where it ain't the most and leaves for college.

Aditya reaches the office and hears his colleagues badmouthing him while female coworkers fear for their dignity.

Aditya's body scolds them and informs Aditya that he has been removed from his job due to the court case and says that he warned him before.

Aditya gets angry while the boss says that it is an order from the board of directors.

Imlie fights with them while the professor sees them and sends them to the principal's office.

Students complain about Imlie while the principal tells her to apologize to Malini for character assassinating her.

Imlie refuses to do it and the Principal rebukes her while Malini enters and acts to be on Imlie's side.

The principal suspends Imlie from college and tells her to not come back.

Later, Malini taunts Imlie that she shouldn't have done wrong with Anu and now will face the consequences.