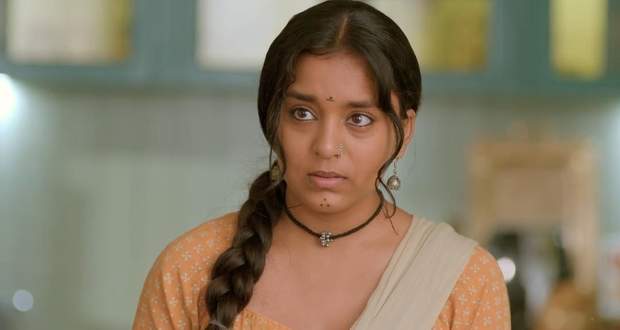 Imlie goes to the kitchen area and cries while remembering Aditya's hurtful words.

Elsewhere, Mithi tears Aditya's home address and says that she wants to go nowhere with Satyakaam.

Satyakaam confronts her and she says that she wants to find her city lover for Imlie and get her his name as the father.

Imlie is sweeping the floor while she sees Rupali crying and consoles her who praises her for having such maturity.

Aparna and other ladies request Imlie to make the Mehandi from its tree leaves and she complies.

Meanwhile, Malini's cousin, Shashank comes to her house while Anu's mother-in-law tells her that they need to feed the poor before the party.

Anu taunts Tripathi's saying that they are poor only.

The Tripathi's talk about Pranav and Rupali's marriage while Imlie hears them from afar.

At the Tripathi house, Imlie makes the Mehandi paste and Aparna shows it to Aditya and leaves.

Aditya taunts Imlie saying she pleases everyone to keep them on her side.

Imlie responds saying that the family's happiness with her is for a short time only as they don't know the truth.

Malini's family enters their home while it is found out that the Mehandi ladies are not coming.

Aparna says that Imlie makes beautiful designs and requests her to do Malini's Mehandi.

However, Anu and Aditya both disagree while Malini requests Imlie to do her Mehandi as she is very lucky for her.

Imlie agrees to do her Mehandi.