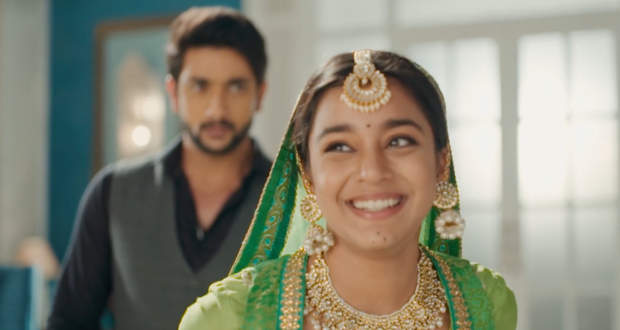 Anu pokes the Tripathi family for dressing well to appear on page 3 of Bhaskar Times.

Aparna makes clear to Anu that they came only for Imlie and not for either Aditya or Malini.

Anu laughs aloud by seeing Imlie dressed up like Simran and says that this costume does not suit her.

Anu humiliates Imlie and utters that role of maid will suit well for her.

Imlie gives a stern reply that it is a costume party and one can wear anything which even does not resemble their real life.

Malini interrupts them and says that we should choose characters that reflect our real life.

She gives the example of Aditya and her choosing Devadas and Parvathi’s characters which suit them well.

Anu triggers Imlie for capturing her photo when she is taking away the evil sight of Aditya and Malini by having salt in her hands.

Aditya questions Imlie that how she can be happy like that, Imlie replies that she will no longer be held back by anybody's tears and will achieve something in life.

Imlie bursts out with pain and remembers Aryan’s words and regains her strength.

Anu asks Imlie to keep Mehandi for Malini and Imlie is convinced to do that.

Anu gets furious at Imlie for ruining Malini’s Mehandi and tries to slap her but Aryan protects Imlie.

Aryan warns Anu for insulting his staff and asks her to control herself.

On the other hand, Malini gets confused after seeing no weakness in Imlie.

© Copyright tellybest.com, 2020, 2021. All Rights Reserved. Unauthorized use and/or duplication of any material from tellybest.com without written permission is strictly prohibited.
Cached Saved on: Thursday 20th of January 2022 11:25:55 AMCached Disp on: Friday 21st of January 2022 05:24:29 PM