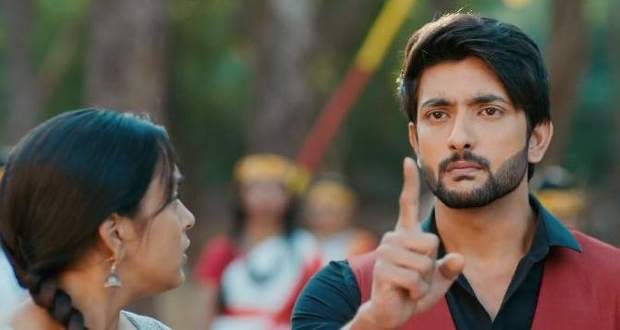 Today's Imli 22 January 2022 episode starts with Imli going back to the Panna tribe with Aryan grumbling behind her.

Neglecting Aaryan's comments, Imlie asks the head of the tribe to bring the material that is required to build a toilet.

Imlie, gives a lesson on the importance of toilets to the people of the tribe.

At the same time, Imlie's identity card falls down which reveals her identity of being a reporter.

The tribe feels betrayed and raises their spear to Imlie in aggression.

Aryan comes and stands before Imlie, saving her from the wrath of the people.

Aryan elaborates to people that Imlie had been denying consistently, since the time they have met her, that she is not their goddess.

The tribal people realize their mistake and apologies to Imlie.

Meanwhile, the Tripathi family is worshipping God, praying for the well-being of their children, Aditya, Imlie, and Aryan.

Arpita gets emotional and goes to the kitchen, leaving the puja.

Sunder follows Arpita and consoles her.

Arpita asks Sunder if she can help him in cooking as it will keep her distracted from the problems.

On the other hand, Aryan and Imlie reach Pagdandia.

There, Aryan meets the local police officer who informs Aryan that his team is safe but the terrorist has taken Dulari with him.

Imlie throws a fit and later on she gets into a fight with Aryan.

Aryan calms himself down and tells Imlie that her mother Mithi has been missing since the blast.

Imlie is devastated and breaks down into fits. Aryan tries to console her.