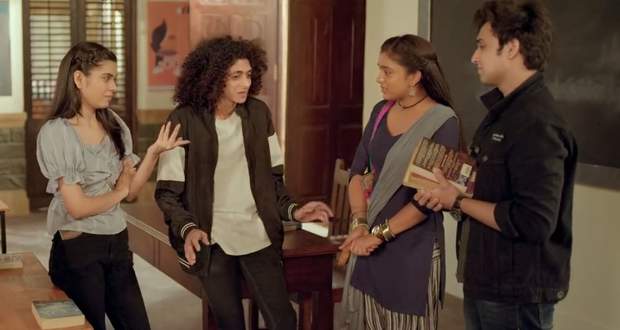 Today's Imli 23 April 2021 episode starts with College students playing a prank on Imlie and making her embarrassed in front of the principal.

Meanwhile, Nishant comes to meet Malini and ask her to think of him as her brother.

Dev and Dadi come to the Tripathi house. They discuss Malini and Aditya. Meanwhile, Aditya arrives there as well.

Aditya answers rudely to their questions. Dev asks the reason for the changes in their relationship.

He tells that he always supported their relation from starting to which Aditya asks to give him time for 1 to 2 days to talk with Malini.

Aditya tells the family about his marriage with Imlie. He tells them that they were forcefully married. He further tells them that he realised that he does not love Malini but he loves Imlie.

The family is shocked to hear about Aditya and Imlie. Aparna calls Imlie while everyone confronts Imlie that she wants to become their daughter-in-law.

Aparna tells Imlie that she cannot be anyone’s true relation. Aparna becomes unwell while everyone ask Imlie to leave the house. Rupali asks them to listen to Imlie once.

It is all Imlie’s imagination and she thinks it should not be true.