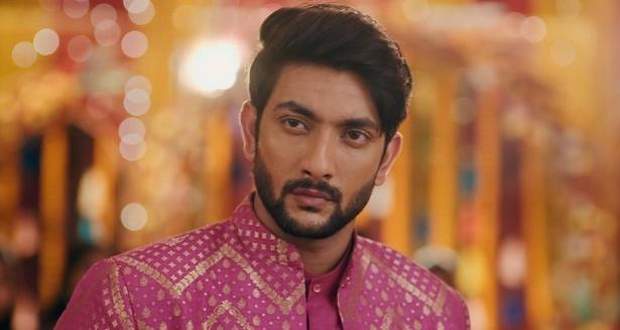 Today's Imlie 23rd March 2022 episode starts with Imlie and Aryan lighting up their lantern. Imlie wishes for everyone’s well-being and to receive love and care from them. She wishes to not have any fake relationship.

Aryan on the other hand, wishes for Imlie’s happiness.

Aparna and Narmada wish for the happy marriage of Imlie and Aryan. Aditya wishes for Imlie to return to him.

Everyone let go of their lantern while Imlie and Aryan's lantern seems to have a problem flying because of Gudiya, who punctures the lantern with a pin.

Neela uses this chance to mock Imlie. Aditya joins her and comments about Aryan's fake marriage.

Aryan gets furious, he gets into an argument with Aditya.

However, Imlie finds out the problem with the lantern and plasters the torn part.

Finally, they let go of their lantern.

A lantern falls to the ground, Neela fails to notice that it is Gudiya’s lantern and taunts about it.

Imlie excuses and leaves the place, Aryan enters the room where she is discarding her jewellery. He offers to help her but she dodges his help and argues with him.

Later, Aryan questions Imlie about the mehndi by grabbing her hand. She signifies the fact about her mehndi.

Imlie tells Aryan that she is levelled up with him and has become witty to the challenge against him.

She discards the plastic layer from her palms and shows him her clear hands. He asks about her excuse to the people when questioned about the mehndi.

She tells him that she has four mothers, Meethi, Narmada, Aparna and goddess Sita. She says that they will know the reason for mehndi, not tinting its shade on her palms and back away from the wedding.

Aryan is taken aback by her actions, he congratulates her for the win and tells her that the game is yet to be continued.

Elsewhere, the ladies are excited and gathered to see Imlie's mehndi. Meethi opens the blanket and takes her hand to check the mehndi.

Imlie is astounded, she sees her hand shaded with the bright shades of the mehndi. Everyone feels happy and teases her about Aryan's love.