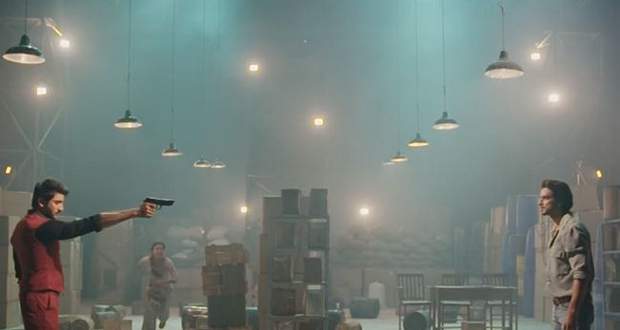 Today's Imli 24 Jan episode starts with Aditya reaching the warehouse where the terrorist Aantak had called him.

Aditya asks Aantak to leave all the people he has held captive as Aditya has brought the ransom money.

Meanwhile, Chandlal comes and acts before Aditya that he is one of the terrorist’s captives.

Believing Chandlal, Aditya gives the bag of money to him.

At the same time, Imlie comes running inside the warehouse where she collides with Chandlal, as a result of which, Chandlal’s real identity of being the terrorist himself comes before Aditya.

Nervous, Aantak presses the button on the remote, hurting Aditya, and tells Imlie that her family is also held captive by him.

Imlie tries to be streak smart and hits Aatank.

At the same time, Aantak presses the trigger of the gun. The bullet hits Imlie on her arm.

Meanwhile, Aryan arrives at the warehouse with the police force.

The action drama unfolds. Imlie makes Aantak diffuse the bomb he had planted in Aditya.

Aantak tries to get hold of the gun but Aryan beats him to it.

Aryan picks up the gun and points it toward Aditya.

The memories from the past flash in his mind again. He presses the trigger.

Everyone is left stunned by Aryan’s action but when the bullet hits Aantak, they all understand the situation.

Injured Aantak falls down near Aditya where the bomb is lying as well.

A big shock comes when Aryan shouts for Aditya to run but before he can, Aantak holds his leg and blasts the bomb.

On the other hand, at the Tripathi house, Nishant and Narmada gets a call after which both goes in shock for a while.

Nishant turns on the tv, where the reporter is reporting the news of another blast in Pagdandia and four people being missing since then.

The list of missing people includes the names of Aryan, Imlie, Aditya, and Aantak.

At the same time, the reporter announces that the rescue team has found a dead body which sends the family members into hysterics.

Upcoming Imli episode: Aditya is suspected to be dead.