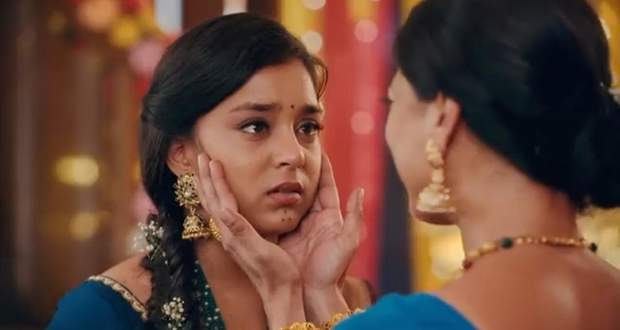 Today's Imlie 24th March 2022 episode starts with dumbfounded Imlie waking up to see her hands filled with the mehndi. Aryan enters her room and greets her with a good morning.

She questions him if it was his doing. He remembers how he knocked on the door and had a cute blabbering session with Imlie and her sleep talking.

Furthermore, Aryan asks for her forgiveness for applying the mehndi without her permission when she was asleep.

Imlie gets enraged, she boils up in frustration and accuses Aryan of using her to satisfy his motives.

She asks why he is up to performing real rituals and weddings instead of faking about it. She starts to let out her frustration by venting it out on Aryan.

However, Aryan thinks that he is doing this to save Imlie from Aditya. But he tells her that he wants to see the pain and regret in Aditya's eyes as they perform their rituals.

Upon listening to Imlie, she rants that she can’t be loved and she is just a pawn in his whole game. Aryan makes a fist to control his anger while his veins pop out from the rage-filled body.

Later, Imlie aggressively wears bangles and breaks them in the process hurting herself while doing so.

Elsewhere, Aditya overhears about Imlie's dark shades of mehndi. He asks her to show her mehndi but she smartly reasons and gets away from him.

However, Imlie rekindles how Aryan was always there for her, supported her, trusted her and respected her in the past when questioned by Aditya.

Meanwhile, Aparna hands Meethi a plate of gifts to distribute as she is the elder one in the family. Meethi feels joyous and resumes her work. Neela mocks Narmada for choosing Imlie for Aryan.

Neela teases Meethi about the gift of five hundred rupees. She teases back and gets out of the place.

Later, Narmada asks Meethi not to feel bad about herself and asks sorry on behalf of Neela.

Imlie and Aryan are dressed up for the rituals with their plots and counterplots.