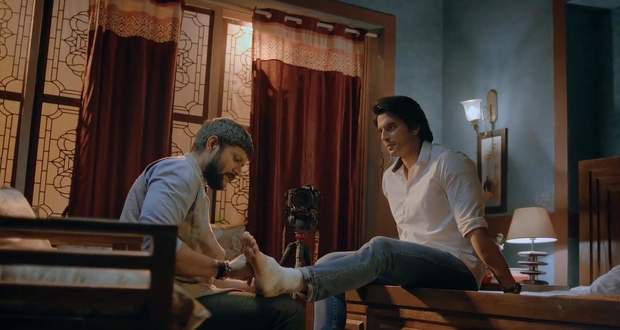 Today's Imli 24 November 2020 episode starts with Aditya saving Satyakaam and Imli from the police. Satyakaam gets ready to give his interview to Aditya.

Imli gets emotional and requests Satyakaam to take her with him. She even feels grateful to Aditya for saving Satyakaam’s life.

Aditya leaves from there on a scooter along with Satyakaam and falls down when he witnesses police going from there.

Satyakaam helps Aditya to get up, while Imli tells her mother that Aditya risked his life to save Satyakaam.

Meanwhile, Satyakaam applies for medicine on Aditya’s wound and shares his life story with him.

He tells Aditya that twenty years ago a town man came to the village and made on an unmarried lady to get pregnant.

Satyakaam tells that the lady gave birth to a girl who is none other than Imli. Elsewhere, Imli teases her mother for not getting married to Satyakaam.

Satyakaam asks Aditya to meet Chandu to know more about his life. He says bye to Aditya and leaves from there to hide from the police.

Further, Aditya’s family begin the preparations for Aditya and Malini’s marriage. Later, Imli and her mother meet Aditya in his hotel room.

Aditya gives them the money which Satyakaam left for Imli’s further studies. Elsewhere, Aditya’s sister taunts her father for not spending money on her dietician course.

The next morning, Aditya calls Malini and informs her about Satyakaam’s interview. Malini feels insecure about hearing a girl’s voice on the call.

She questions Aditya about the girl, while Imli asks him to leave to meet Chandu.

Aditya promises Malini tells Aditya that she is waiting for him and asks him to come back soon.

© Copyright tellybest.com, 2020, 2021. All Rights Reserved. Unauthorized use and/or duplication of any material from tellybest.com without written permission is strictly prohibited.
Cached Saved on: Sunday 17th of January 2021 04:47:04 AM