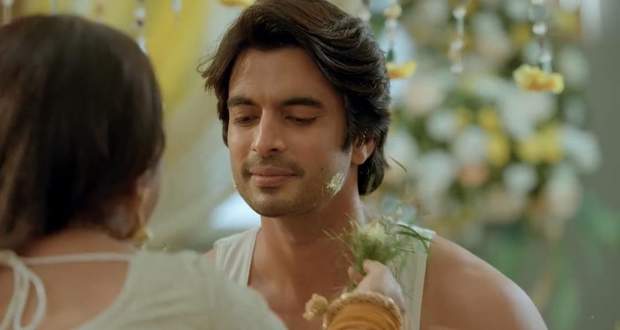 Twinkle drags Imlie to the Pooja but spaces the Haldi at her and Aditya accidentally.

Anu tells her mother-in-law that she has brought organic Haldi for Malini and that she should not use that cheap paste.

However, Malini mixes both Haldi paste's and says that she will use both of them.

The Haldi ceremony commences while Imlie remembers the rituals she went through at her wedding.

Anu gets emotional and has a heartfelt talk with Malini while hugging her.

Elsewhere, Mithi tells Satyakaam to call Aditya and he calls but Sunny picks up the call and gets distracted due to which Satyakaam isn't able to talk to Aditya.

But Mithi hears the family members talking to Imlie and feels happy that she is accepted in that house.

The next day, Aditya asks Imlie if her bags are packed.

At the same time, Aparna comes there and gives Imlie Vermilion telling her to hold it for her till the marriage.

Dev and Anu give flight tickets of Switzerland to Malini as a honeymoon gift and she calls Aditya to inform him of the gift.

Aditya picks up the call and says angrily that she is not satisfied with his plan of going to Goa after hearing her news.

Aditya apologises to her for his behaviour and ends the call while he sees Imlie standing behind him.

Aditya berates her for accepting the responsibility of holding vermilion and tells her to give it to someone else.

However, Imlie says that she will fulfill the responsibility she is given and then she will leave him forever.

Later, Aditya gets emotional while his father comes there and tries to console him.