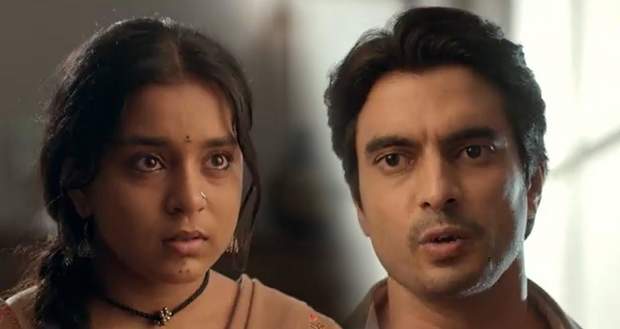 She notices Dev's car and wonders why he is there.

Meanwhile, Dev pleases with Satyakaam that he is there to take Imlie's responsibility.

Satyakaam beats him saying that Imlie doesn't need him and that she is a grown-up.

Aditya is searching for Satyakaam while Meethi comes behind him and offers to help him after which he tells everyone to find Satyakaam in different directions.

Satyakaam tells Dev that he will kill him while Dev again pleads that he just wants to hug Imlie for the last time to let her know that she has a father.

He is about to shoot him while Meethi comes there and stops him saying that he is Imlie father.

However, Aditya is not so far away and gets shocked overhearing Dev's truth and understands everything.

Tripathi's try to convince Anu that Malini will solve her matter with Aditya while Anu says that they will not take Aditya's side as he is their son.

Satyakaam lashes out at Dev and insults him for leaving Imlie and Meethi alone while again aiming the gun at him but Meethi stops him by slapping him.

However, Satyakaam says that just the name of the father is not enough as the father has to take responsibility which Dev didn't take.

He further says that he can give his name to Imlie as a father and leaves while Aditya thinks that Satyakaam has been more respectful for him.