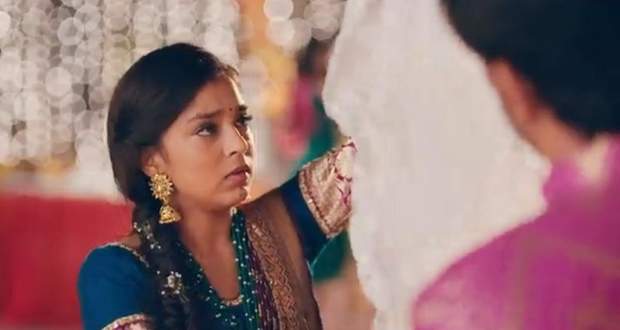 Today's Imlie 25th March 2022 episode starts with Imlie and Aryan walking up to each other for the Sangeet party.

Imlie tauntingly shows her mehndi to Aryan. He grabs her suddenly and checks her hand recalling her rage while putting on bangles.

Aryan tells Imlie that she can never get rid of his name from her life.

Meanwhile, Narmada spots them and teases them about their honeymoon.

Everyone is waiting curiously for Imlie and Aryan.

Due to jealousy, Gudiya breaks the glass upon witnessing Imlie and Aryan holding hands with each other.

Later, Meethi starts telling everyone about Imlie’s naughtiness and her love for dance. Aryan asks her more about Imlie's childhood.

Meethi sings a sentimental mother song dedicating it to Imlie. All the ladies join for a big group hug.

After a while, Imlie proposes to dance but with a twist of becoming like a statue. The music is turned on and everyone enjoys their time by dancing.

Amidst the hustle and bustle, Imlie sneaks out of the Sangeet ceremony in search of Aditya's video. Aryan notices her absence and moves to search for her but Arpita drags him to enjoy the dance.

However, when Imlie discovers Aditya's proof of innocence, Aryan surprises her with a shocking revelation.

Imlie learns that the file gets corrupted after watching it once from the pen drive.

Aryan tells her about her selflessness towards Aditya and his family and asks her to put herself first.

Furthermore, he grabs Imlie's hands and tells her to never underestimate her opponent.

Aryan lifts Imlie and carry her back to the party though she wiggles out from his grip to get down.