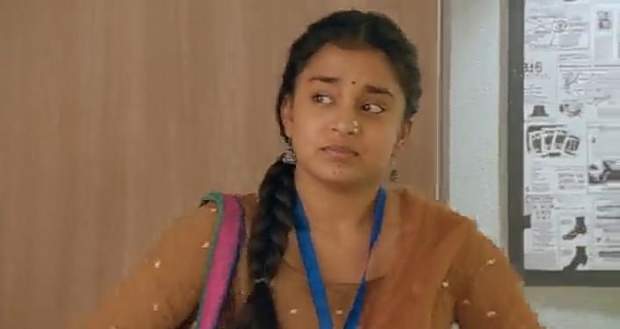 Today's Imli 25 November 2021 episode starts with Imli going to the temple where she sees Aparna and Radha and shows them her article as they share their happiness now.

They stumble upon Aditya's topic and she leaves from there while she bumps into Aryan and Narmada.

Narmada greets Imlie and tells Aryan to take Imlie with him to the office but they both deny and talk in sync while Narmada gets amused seeing it.

At the Tripathi house, Aparna and Radha talk about meeting Imlie while Malini tries to instigate Aditya against Imlie by asking if Imlie gave any credit for her success to Aditya.

However, Rupali stands up for Imlie and leaves the breakfast table.

Meanwhile, Imlie learns that Aryan put her article on the front page instead of Aditya's and gets angry while the warden sees her in the car and thinks of her as a liar.

Rupali and Nishant decide to surprisingly take Aditya with them to celebrate with Imlie while Malini overheard them and forms a plan.

Outside the office, Aditya sees Imlie and Aryan coming out from the same car and recalls Malini's words.

At the same time, Imlie thinks that Aditya must have gotten happy reading her article and goes towards him but he goes inside ignoring her.

Later, Imlie sees Aditya scolding other employees and talks to him while he tells her that her article should've been on the sixth page and not the front page.

However, the editor scolds them for fighting in the office and says that this is why it's hard to work with couples.

Aryan overhears them and figures out that Aditya and Imlie are married but separate.

Upcoming Imli episode update: Imlie gets kicked out of the hostel.