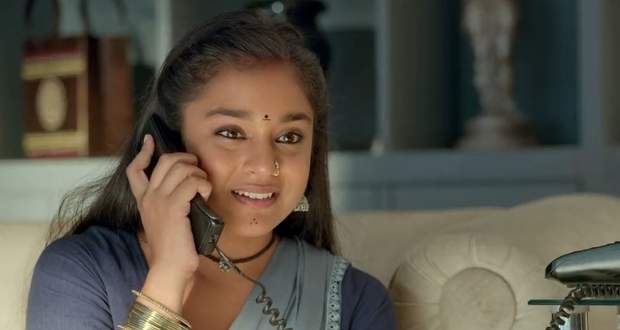 Malini receives the call. Aditya tells her he wants to meet her while she asks if he is free with Imli. He tells her then, he will meet her tomorrow and she agrees.

Aditya disconnects the calls without answering Malini’s question while Malini thinks to end everything.

Imli calls Meeti but Meeti refuses to talk to her. Prakash tries to convince her but Nani comes there. Prakash goes to talk to Imli.

Malini overhears Dev and Dadi willing to go to Imli’s ceremony. Dev assures Malini that everything will be fine. Malini asks them to go to Imli's award ceremony.

Meanwhile, Malini receives Imli’s call and they talk about Aditya. Malini informs that Dev and Dadi are also coming. Malini refuses to attend the ceremony.

Malini gets ready as a bride thinking about Aditya while Imli gets ready for the ceremony. Malini thinks that she cannot be in the relationship just for the namesake.

© Copyright tellybest.com, 2020, 2021. All Rights Reserved. Unauthorized use and/or duplication of any material from tellybest.com without written permission is strictly prohibited.
Cached Saved on: Tuesday 30th of November 2021 05:37:05 AMCached Disp on: Wednesday 1st of December 2021 02:38:54 PM