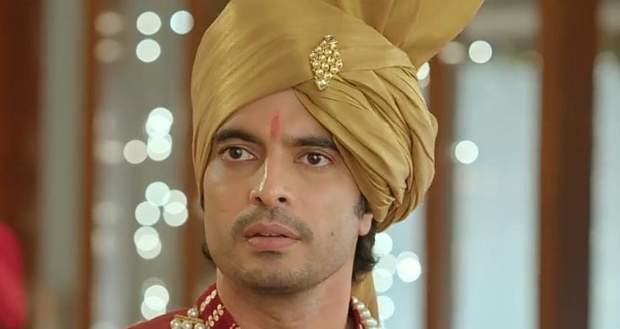 Today's Imli 26 December 2020 episode starts with Tripathi's doing a ritual on Aditya while Imlie watches them from afar.

Aparna calls her near and Aditya feels shocked to see her in the Saree she wore at their wedding.

Aparna and others compliment Imlie and say that she looks like a bride and do her Aarti to cast away bad eyes.

Family members talk about Imlie's marriage while she runs away.

Elsewhere, Dev looks at the painting of Malini when she was a child and Malini comes there.

Suddenly, Anu comes there and says that she hopes Aditya is not like Dev and tells Shashank to click a picture of them.

Anu looks at the photo and sees a picture resembling a village lady and goes to put it down.

Dev remembers that he made that picture while looking at Mithi.

Meanwhile, Imlie packs her belongings and reminisces her moments in the Tripathi house as she exits.

Imlie feels dejected standing at the door and seeing Aditya doing rituals for his wedding.

Aparna calls her and she comes hiding her belongings behind her back.

Everyone dances at the Baarat and start leaving while someone pushes Imlie and her belongings scatter.

Imlie picks up her broken bangles and cries while the Baarat leaves.

The Baarat reaches Malini's house while Dhruv takes Imlie's bag saying that he will keep it safe for her and tells her to go ahead and dance.

Elsewhere, Satyakaam and Mithi come in front of Dev and Anu's car while Shashank comes out of the car and starts misbehaving with them.

Dev is about to get out of the car but Anu stops him while Satyakaam points a gun at Shashank and tells him to leave.

Shashank gets into the car and leaves while Dev feels that Mithi is near.

© Copyright tellybest.com, 2020, 2021. All Rights Reserved. Unauthorized use and/or duplication of any material from tellybest.com without written permission is strictly prohibited.
Cached Saved on: Thursday 28th of January 2021 01:43:50 PM