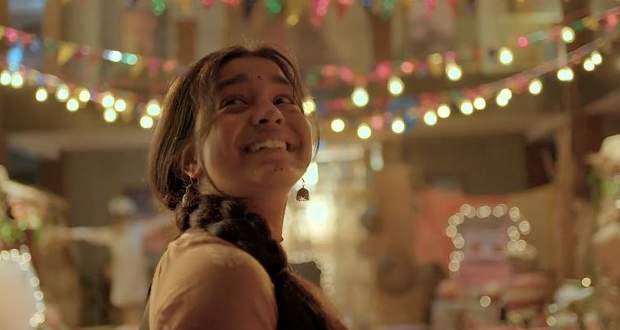 Meanwhile, Dev feels sad about abandoning Mithi while he apologizes to Mithi's photograph. At the same time, Anu arrives at his place and taunts Dev.

Simultaneously, Dev loses his cool at Anu and yells at her.

Elsewhere, Aditya tells happy news to the Tripathis that Imli can be discharged from the hospital the next day while they arrange a surprise party for Imli.

On the other hand, Aditya and Malini come to the hospital for taking Imli home.

Meanwhile, Imli creates a funny scene at the hospital while she thanks the doctor and the nurses and chants for them. At the same time, Aditya interrupts and scolds Imli.

Later, Imli feels emotional and thanks Aditya while Imli and Aditya take her home. Elsewhere, Anu finds suspicious at Dev when he feels excited about Imli's matters.

As soon as Imli enters the Tripatis house, she feels amazed by the party set of village theme while the Tripatis welcome her.

Meanwhile, Imli feels at home and gets emotional for Tripathis' affection towards her.

© Copyright tellybest.com, 2020, 2021. All Rights Reserved. Unauthorized use and/or duplication of any material from tellybest.com without written permission is strictly prohibited.
Cached Saved on: Tuesday 28th of September 2021 07:23:39 AM