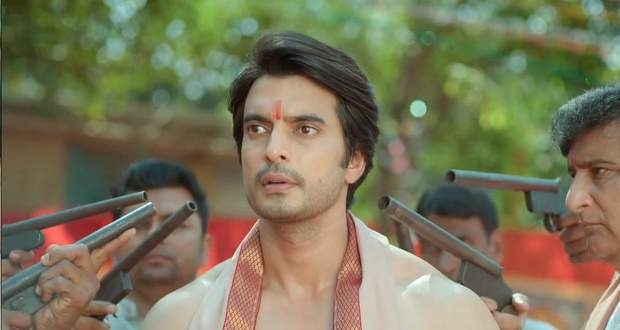 Today's Imli 27 November 2020 episode starts with Amma taunting Imli for taking a stand for Aditya in front of the villagers. Aditya asks the Sarpanch to contact Satyakaam to know about his motive of coming to the village.

Amma puts forth a condition in front of Aditya to marry Imli to save his life. Meanwhile, Malini eagerly waits for Aditya to come back from the village.

The villagers force Aditya to marry Imli, while Aditya says that he will accept death and asks the villagers to decide who will kill him.

The villagers run toward Aditya with knives but Imli comes in between and holds the knife to save Aditya.

Imli gets ready to marry Aditya to save his life, while Aditya asks her to not to take any childish decision.

Meanwhile, Malini starts crying when her special dish for Aditya gets spoiled. Anu comes there and cheers Malini’s mood.

Imli tells her mother that she cannot ruin Aditya’s life as he is already in love with a lady. She decides to help Aditya in running away from the village.

Imli finds Aditya’s phone and tells Mithi that she will hand over the phone to Aditya. The villagers force Aditya to get ready for his marriage.

Amma stops Imli and Mithi on their way and forces Imli to get ready for her marriage. Elsewhere, Tripathi’s gets a shock on learning that Aditya didn’t leave from the village.

Upcoming Imli episode update: Aditya and Imli get married and leave for Delhi.

© Copyright tellybest.com, 2020, 2021. All Rights Reserved. Unauthorized use and/or duplication of any material from tellybest.com without written permission is strictly prohibited.
Cached Saved on: Sunday 17th of January 2021 05:40:04 AM