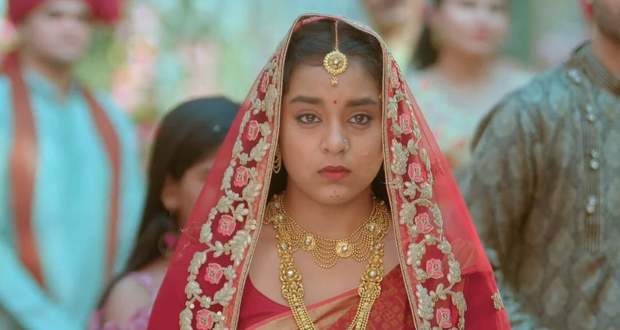 Today's Imli 28 December 2020 episode starts with Malini's sisters doing the ritual of demanding money from Aditya to let him enter the house.

Anu taunts them and shows off bundles of money for her side of the ritual. Anu rudely tells Imlie to take the money.

However, Imlie tells them to buy their lipsticks and makeup from the money as she only takes the money she worked hard for.

Elsewhere, Malini's friends make fun of Imlie while Malini stands up for her.

Nidhi finds Imlie and convinces her to do something while Aditya worries for Imlie.

Suddenly, the Tripathi ladies do a dance performance and Aditya gets shocked to see Imlie dancing with them.

The ladies start dancing with their husbands while Imlie slips from the crowd and leaves.

Meanwhile, Satyakaam and Mithi reach Tripathi house where Sundar them's them that everyone is at Kapadiya hotel.

Anu questions Imlie about her father and feels suspicious that she is Dev's daughter.

Anu tells Imlie to find out her father's name tell her immediately.

Imlie cries in the corner and decides to stand up for her rights.

Later, Aditya comes there and tells her that the office boy is waiting for her at the gate to take her to the bus station and tells her to pick up her belonging and come.

However, Imlie talks back and says that she will not give up her right as his wife.

Aditya starts berating her and accuses her of blackmailing him.

Aditya grabs her hand and says that he is not scared of her threats.

He pulls her towards the crowd and says that he will reveal the truth of their married to everyone himself.

© Copyright tellybest.com, 2020, 2021. All Rights Reserved. Unauthorized use and/or duplication of any material from tellybest.com without written permission is strictly prohibited.
Cached Saved on: Friday 30th of July 2021 01:54:46 PM