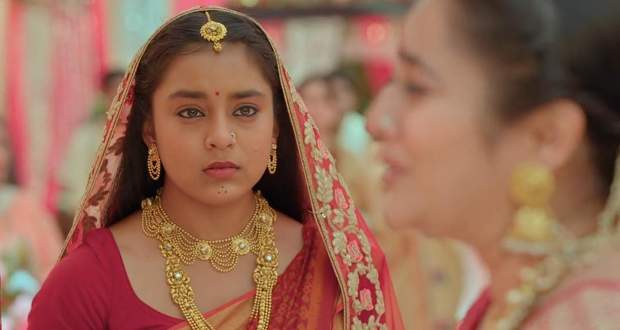 Today's Imli 29 December 2020 episode starts with Aditya dragging Imlie towards Aparna who is tearing up.

Malini makes her entry and Aparna goes to do the ritual.

Aditya tells Imlie to reveal the truth to everyone if she feels like it is her right. At the same time, Malini's dupatta gets damaged.

Imlie goes to her and gives Malini her dupatta to wear which stuns Aditya.

Malini goes forward while Imlie goes outside and cries saying that she sacrifices her marriage rights to Malini.

Dev comes there to check-up on her and shows his gratitude towards her for giving Malini her dupatta.

He goes inside while Imlie wishes of having a father like her.

Elsewhere, Mithi and Satyakaam are on their way to the wedding venue while police searches for Satyakaam.

At the same time, Shashank puts a cloth over Imlie and takes her away while Aditya and Malini are doing wedding rituals.

Aditya sees the office boy and wonders where is Imlie.

Shashank throws Imlie inside a room and locks the door from inside while Imlie slaps him and tell him to let her go.

He throws on the sofa when suddenly Aditya comes there and beats Shashank.

The whole family comes there and Shashank blames Imlie saying she brought him here.

Anu slaps him while Dev kicks him out of the wedding.

Malini apologises to her as Aditya hears his fathers words about responsibility.

Panditji says that auspicious time for the wedding is running out when Aditya says that he can't marry Malini as he is already married.

He reveals that he is married to Imlie.

Upcoming Imli episode update: Imlie to stand beside Malini as she marries Aditya.