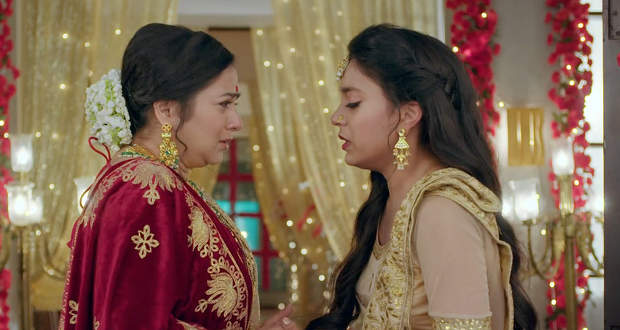 Today's Imli 29 December 2021 episode starts with Imlie claiming to herself that the mandap is her funeral pyre and she can not watch what is going to happen in the mandap and tries to leave when Aparna stops her.

Aparna asks Imlie to stop the wedding but she runs away.

While running, she recalls the words of Aparna and decides to give Aditya a chance.

Meanwhile, Pankaj talks to Aditya and asks him to listen to his heart and stop his wedding.

After some time, Aditya disheartens Malini saying that he can not marry her. He says Malini is his friend and he will always support her as a friend, not as a husband.

Malini retorts back that it is Aditya’s mistake and says that he has hurt her. She says he does not know how many hurdles she has crossed to get Aditya in her life.

Aditya messages Imlie to meet him but since Aryan has Imlie’s phone, he reads the message.

Aryan decides to give the phone to Imlie but remembers all the bad things that Aditya did to Imlie and decides not to do it.

He says even though he could not protect his family from Aditya but he will protect Imlie from him.

Later, when Imlie is coming back to meet Aditya, she gets kidnapped by Anu.

Imlie is left locked in a car and she tries to get out by trying her pin in the car and also shouts for help but fails.

Aditya thinks that Imlie has read the message and waits for her desperately.

At the same time, the family members argue whether to stop the wedding of Aditya and Malini.

Pankaj claims to mortgage the house if he has to pay all the wedding expenditure to Anu but he’ll stop the wedding whereas Harish Tripathi is shocked to hear that and tries to stop him.