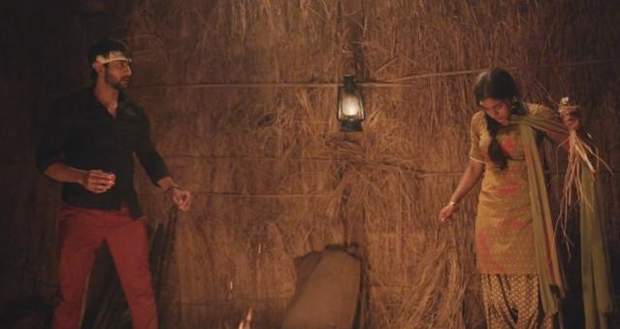 Aryan enlightens the villagers of Imlie’s achievements and how they have highlighted Pagdandia’s name among the urban people.

Meanwhile, Imlie is astounded to see Aryan defend in front of the crowd.

As Aryan drops the wooden stick, a villager comes forward and hits him on the head.

Imlie snaps at the villagers, asking them to stop hitting Aryan.

Aggravated, villagers decide to take both Imlie and Aryan with them.

On the other hand, Mithi gets the news of villagers finding Imlie with Aryan.

Further on, Anu informs Malini that they are filing a case against the Tripathi family for the property.

Meanwhile, Mithi pleads to the village Sarpanch to leave Imlie.

Instead, the Sarpanch gets Mithi tied to the tree where Aryan and Imlie were being tied.

The crowd throws stones at Imlie and Mithi.

At the same time, Imlie gets herself free from the bounds and faces the crowd.

Aryan and Mithi also get free and together the three fight with the angry crowd.

Further on, Aryan and Imlie run away when Mithi asks them to.

The villagers run behind the duo to catch them.

Mithi screams in fright when a person from the crowd throws a spear aimed at Imlie.

At the same time, the anonymous man arrives saving Imlie from the attack.

The anonymous man is none other than Aditya Tripathi.

When Aditya and Aryan both fight with villagers to defend Imlie, villagers start calling Imlie names and decide to kill her as they believe Imlie is the root cause of everything.

Aryan hits the other attacker when he goes to attack Imlie which scares the villagers and they leave the place.

Imlie thank Aditya for saving her life but he becomes sarcastic with her.