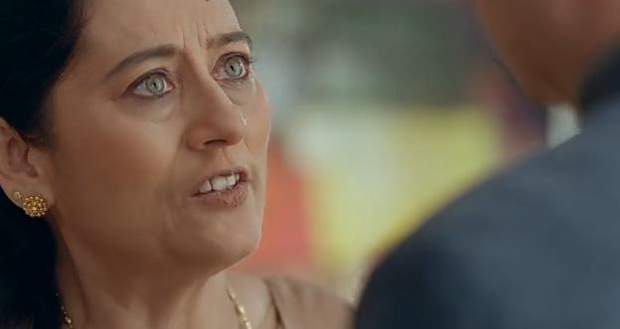 Today's Imli 2 February 2021 episode starts with The Tripathi's celebrating Aditya's achievement while Aparna informs Malini that there is Savitri fast next day.

Malini asks about the fast while Imlie tells the purpose of the Savant fast which shocks everyone.

Aditya tells Malini that she shouldn't do the fast but she says that it will make her happy to do the fast and manages to convince him.

Elsewhere, Dev's mother greets Anu who gets stunned to see her there.

Dev's mother says that she bought a pair of bangles for her and shows her the jewellery box while Anu sees the rest two gold chains and asks her about it.

She hesitates to answer while Anu gets a call from the Tripathi's and gets informed that they have invited her for dinner after the Savitri fast.

Dev's mother meets him and gets relieved to see her but she says that she is here just for her granddaughter, Imlie after what he told her.

She shows him the gold chain that she got for both Malini and Imlie while Anu asks them what they were talking about and they make up an excuse.

Next early morning, the Tripathi gents help their wives get ready while Imlie decides to do the Savitri fast to keep the promise she gave to her mother.

The husbands are feeding their wives while Harish notices Imlie talks to her.

She tells the ladies that she will clean the place and tells them to go.

She goes behind the counter and eats the apple while Aditya comes there and gets shocked to see her.

Aditya confronts her while she makes an excuse.

© Copyright tellybest.com, 2020, 2021. All Rights Reserved. Unauthorized use and/or duplication of any material from tellybest.com without written permission is strictly prohibited.
Cached Saved on: Tuesday 21st of September 2021 05:53:20 AM